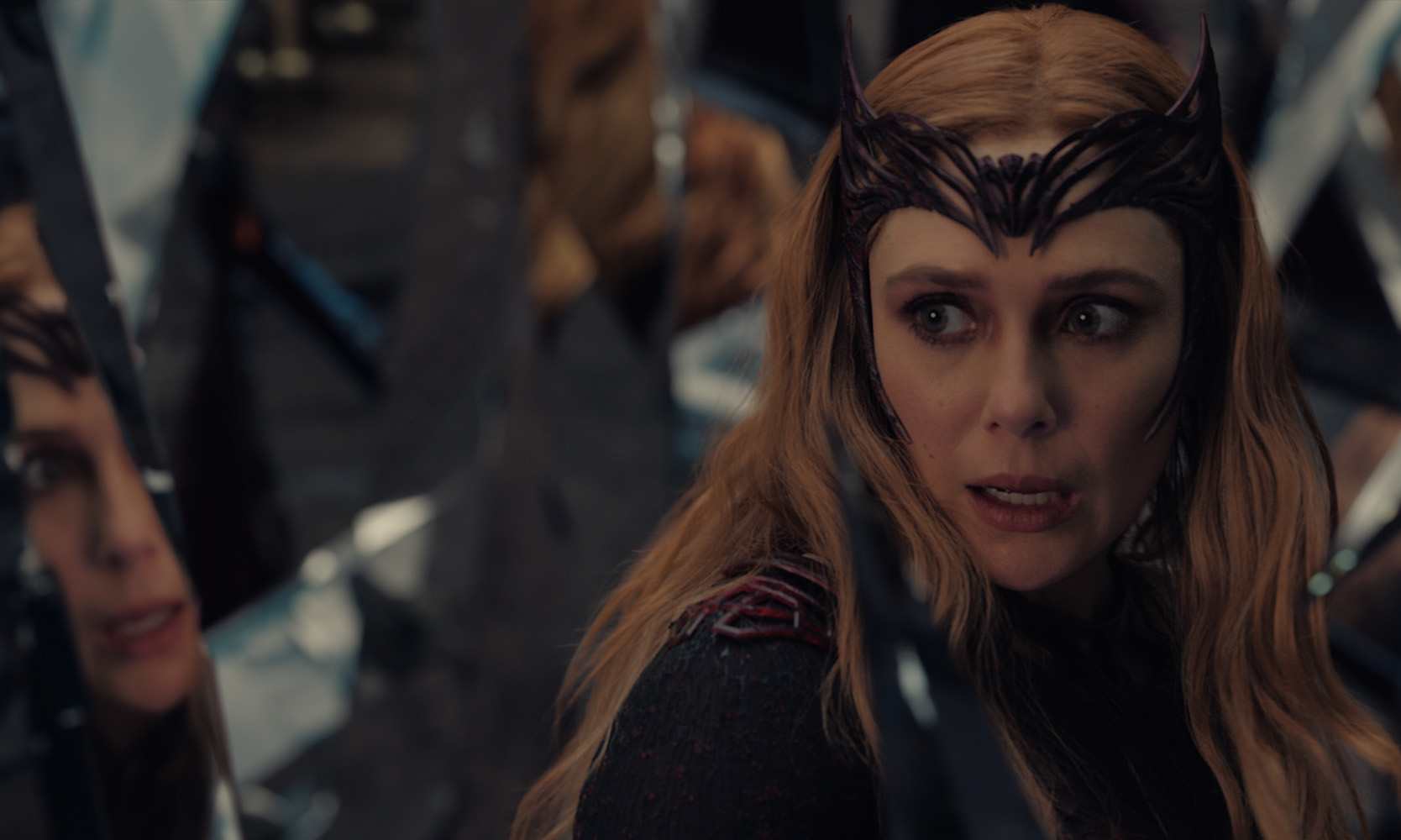 06.03.22The Legendary VFX Studio Created a Reality Where Two Universes Collide, With a Reimagined Sanctum Santorum at the Heart

LOS ANGELES – June 3, 2022 – In Doctor Strange in the Multiverse of Madness, Marvel Studios pushes the boundaries of reality – and then keeps going. With broken universes, environments wrapped in illusion and magical traps that shatter the world, the film introduces visual elements unlike anything ever seen before. To help show audiences a new look at reality, Marvel Studios turned to long-time VFX partner and Oscar-winning studio, Digital Domain.

“In Doctor Strange in the Multiverse of Madness the visuals play an important role in the storytelling process, as the characters hop from one incredible reality to another, seeing impossible things as they go,” said Joel Behrens, VFX supervisor for Digital Domain. “That gave us the opportunity to create worlds and new realities for audiences to enjoy, which is something most artists can only dream of doing.”

Worlds and Worlds
During his desperate, reality-hopping flight through the “Multiverse,” Doctor Strange (Benedict Cumberbatch) at one point finds himself in the center of an “incursion,” highlighting the consequences of two realities colliding. Although the people are gone, pieces of the decimated universes continue to exist, with shattered buildings no longer held in check by gravity and the ghostly remnants of dead civilizations flying by. At the heart of these dead realities, one structure remains standing: a warped version of Doctor Strange‘s home, the Sanctum Sanctorum.

To create the scene of metaversal destruction, the filmmakers utilized a combination of both physical and digital effects, starting with a practical two-story stage with bluescreens above and surrounding the stage. As the performers move down the ruined, prop-filled streets of a familiar-looking version of New York City, digital artists added the sky – including shattered buildings and wreckage from two realities floating by.

Digital Domain began by designing pieces from two separate realities, each with their own distinct flair. Using Houdini and V-Ray for lighting and rendering, artists began by creating several CG assets ranging from debris to vehicles to pieces of buildings. For the first of the two Earths, the materials looked familiar and would be right at home in our own New York City (and even included a CG version of a certain 1973 Oldsmobile Delta 88 that fans of director Sam Raimi’s films will no doubt appreciate). The larger assets, including the buildings, were then broken into countless pieces of debris, which were then animated to suggest a flowing motion from the shattered structures into the dead void above.

With the familiar assets complete, Digital Domain then began constructing the remnants of a Victorian-inspired version of New York, complete with gothic spires and ornate metalworking. To highlight this alternate world, artists began by adapting familiar structures, including the Brooklyn Bridge and several other altered pieces. After reimagining them both under a Steampunk-lens, the CG assets were then broken into pieces and animated before being added to the crowded sky.

With the ruined, moving worlds created, Digital Domain then combined the digital content with the live-action footage of the incursion, adding in the objects in the sky and the extension of the streets. The scene was then topped with a haunting gray sky reminiscent of fog, but reflecting the absence of anything beyond it. With the broken materials in motion, artists then took things one step further and showed pieces of the ruined cities colliding with each other, creating even more debris. The VFX team also digitally recreated part of the physical set to bring the collisions down to the street level.

With the world collapsing around him, Doctor Strange heads to the one place he thinks might help him find a way back home: an alternate version of Sanctum Sanctorum. But once he arrives, it’s clear that the alternate version of his home is a very different place than the one he left behind. To create the “Sinister Sanctum,” Digital Domain began by digitally reconstructing the once inviting structure from the ground up to make it feel more like a mausoleum than a sanctuary. Artists then built on that by extending and animating the crumbling roof as it trails off in the void, while also combining CG skulls to the physical skull props scattered around the ground. In total, Digital Domain used only one existing asset for the sequence, the shattered remnants of the iconic window.

Once inside, the alternate Sanctum Sanctorum further highlights the broken nature of the world, with a physical set standing in for the floor and the walls, and bluescreens for the rest. Utilizing plates taken from a beach in Iceland, Digital Domain created a CG ocean in Houdini, then flooded the scene digitally. The VFX studio then took images of the physical staircase on set and extended it to show it leading off into a seemingly endless march upward, before being lost in the fog-like haze.

Apples and Illusions
With the Multiverse in play, Doctor Strange seeks help from ally and fellow magic user, Wanda Maximoff (Elizabeth Olsen), who is still dealing with the emotional fallout of the events depicted in the Disney+ series, WandaVision. She and Strange discuss the Multiverse while walking through an idyllic apple orchard, filmed on location in a real farm in England. Things change quickly though, and the orchard is replaced by a warped and twisted environment, digitally created to visually convey the consequences of dark magic.

The transformation sequence begins with an effect similar to the hex wall magic effect seen in WandaVision. To create that look for the series, Digital Domain worked with the showrunners to find a look that felt like a natural extension of Wanda’s powers, but with a more chaotic and powerful feel. After multiple iterations, the new hex power was introduced along with the Scarlet Witch persona.

Once the true environment is revealed, the live-action moved from on-location filming to a bluescreen set. Teams at Digital Domain developed the corrupted version of the orchard, highlighted by twisted, ruined trees, dusty grounds and a red sky covering it all. The once inviting farmhouse – created digitally – was also replaced by a ruined husk of itself. Artists also added swampy gasses and the sun, but filtered through the dark, nearly impenetrable clouds. It’s a scene straight from a nightmare, setting the tone for the events still to come.

Mirrors and Traps
After the film’s villain has been revealed, the heroes head to the magical stronghold of Kamar-Taj, where they prepare for a battle that pits magic against magic. During the battle, Wanda finds herself caught in a unique and powerful trap, where mirrors and reflections become a prison.

Digital Domain started at the very beginning with the sequence's previs to establish the full look and movements. Artists then began to create a smaller, more contained version of the mirror realm initially introduced in 2016’s Doctor Strange. As the character Wanda moves into the mirror realm, launches a hex bolt, created using the same techniques Digital Domain used for Wanda’s evolving magic in WandaVision. The mirror then shatters, creating multiple shards, generated in Houdini.

For the live-action component, Olsen recorded several versions of the scene, offering the filmmakers and VFX artists several reactions to work with. The VFX team then referenced the multiple shots to create several looks for Wanda they then animated, each highlighting a different reaction within the mirror realm. The action then heads back into Kamar-Taj, with digidoubles of Wanda pushing through mirrors and reflections. The digidoubles of Olsen – along with digital models of Cumberbatch created from digital scans of the actor – were then shared with other VFX studios for use throughout the film.

“Part of the reason Marvel Studios has had so much success is that they have a clear vision, and an understanding of what needs to be done to make that become a reality,” said John Fragomeni, global president of Digital Domain. “Creating something as unique as a Multiverse and pairing it with reality-bending magic isn’t a simple task, but we’ve been collaborating with Marvel for years now. Understanding and executing on their vision has been key to our success, and we can’t wait to show audiences what comes next.”

Digital Domain’s work on Doctor Strange in the Multiverse of Madness marks the latest in a long line of collaborations between Marvel Studios and the VFX studio. The team-up will continue with the episodics Ms. Marvel and She-Hulk, the feature Black Panther: Wakanda Forever and more.

Doctor Strange in the Multiverse of Madness is playing now in theaters, and will begin streaming exclusively on Disney+ June 22.