For the first time, an original creation from china will be featured at the film festival, helping to showcase chinese vr technology on the international stage

LOS ANGELES, Dec. 12, 2017 /PRNewswire/ -- Digital Domain, one of the largest and most innovative providers of visual effects and virtual reality (VR) experiences, announced today that its original VR creation "Micro Giants" is to be featured at the New Frontier exhibition of the 2018 Sundance Film Festival in recognition of the exceptional creativity made possible by advanced VR technology. "Micro Giants" beat numerous independent AI, VR or MR entries to become the only original creation from China to be featured at the New Frontier exhibition. This is also the first original creation from Digital Domain's Greater China team to receive an international honor. Digital Domain continues to be honored by the Sundance Film Institute, as the studio was featured by New Frontier in 2015 for the production of "Evolution of Verse," directed by Chris Milk. 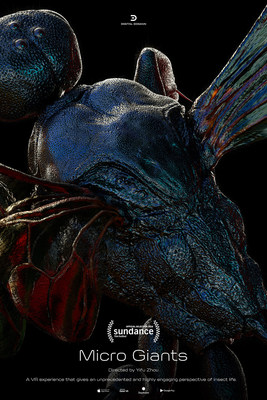 To view the trailer on YouTube:
2D trailer for the immersive experience: https://youtu.be/a13wgYDLOQ4

"Micro Giants" tells an immersive narrative about animals and plants in a micro-ecosystem through vivid details and an exquisite design. For a film that is entirely created by a diverse Greater China team within the global studio to be solely featured at the New Frontier exhibition of the Sundance Film Festival indicates that VR accomplishments from around the world are winning international recognition. Digital Domain continues to leverage its strong background in the visual effects community and proprietary access to innovative immersive technologies to boost the development of their regional locations to create quality VR content for consumers worldwide.

Daniel Seah, Executive Director and Chief Executive Officer of Digital Domain, commented, "We thank the organizers of the film festival for giving us this opportunity. To be recognized shows off Digital Domain's VR strength and creativity, but also helps to showcase the accomplishments of the Chinese VR community. I'm thrilled to see that Digital Domain can showcase more regional talent on the international stage with an original VR creation like 'Micro Giants'."

"As another original IP for Digital Domain, 'Micro Giants' has fully demonstrated our top artistic creativity and advanced VR technology," Seah went on to say. "Since we entered the VR market, Digital Domain has expanded from only B2B to achieving remarkable results in B2C. As 'Micro Giants' receives this international honor, we're even more confident of, and holding higher expectations for, the future of our VR business."

Yifu Zhou, Micro Giants Director and Creative Director at Digital Domain Greater China, said, "We've been trying to make today's films more viable and more diverse through VR. 'Micro Giants' is completely produced through CG, using 360-degree animation to unveil the secret world in forests and under grasses as vividly as it can be. This is made possible by the clever artistic conceptualization and extraordinary skills of our team. I'm very pleased to see that this creation can be recognized by the Sundance Film Festival. This not only is encouraging to Digital Domain's Greater China team, but also will further inspire the enthusiasm of Chinese artists around the world for VR creation."

Digital Domain boasts a world-class VR creation team. Yifu Zhou, who is the Director of "Micro Giants" and currently Creative Director at Digital Domain Greater China, joined Digital Domain in 2013, responsible for the development and production of the company's original contents. Zhou and his team began to venture into the VR field in 2016. They were involved in projects like the production of TFBOYS' VR music video "The Big Dreamer", the live broadcast of Faye Wong's"Moments Live" concert using VR special effects, and the VR extra of the film "Legend of the Naga Pearls". With very high artistic attainments and content quality, they set the bar for VR creation in the Greater China region. Previously, Zhou was in Digital Domain's Los Angeles studio working on visual effects for blockbusters such as the Disney film "Maleficent" as well as commercials for Nissan and Nike. Zhou also worked together with Marvel Comics founder Stan Lee to create Superhero content, obtaining rich experience in the industry.

About Digital Domain
Digital Domain creates transportive experiences that entertain, inform and inspire. The company is a pioneer in many fields, including visual effects, livestreaming landmark events in 360° virtual reality, building situational awareness applications, creating "virtual humans" for use in films and live events, and developing interactive content.

A creative force in visual effects and media applications, Digital Domain and its predecessor entities have brought artistry and technology to hundreds of motion pictures, commercials, video games, music videos and virtual reality experiences. Its groundbreaking visual effects appear in films such as "Titanic," "The Curious Case of Benjamin Button" and blockbusters "Spider-Man: Homecoming" and "Beauty and the Beast." Staff artists have won more than 100 major awards, including Academy Awards, Clios, BAFTA awards and Cannes Lions.