Digital Domain Holds Its 2018 Strategic Conference in the “Oasis”

08.22.18To concentrate on its Greater China business development and creation of a new business landscape in the virtual world

(22 August 2018, Beijing) Digital Domain Holdings Limited (the “Group” or “Digital Domain”; stock code:547), one of the largest and most innovative providers of visual effects and virtual reality (VR) experiences, today held its 2018 strategic conference themed “Oasis” in Beijing. During the event, the Group announced its Greater China deployment strategy for four major business sectors including Visual Effects (VFX), Virtual Reality (VR), Virtual Human (VH), and investment in film and television content, together with its strategic partnership with China's leading image processing and social media platform Meitu around diversified social and travelling consumer groups. Through a range of strategic moves, Digital Domain will fully connect its four business sectors and further consolidate the one-stop operation model covering technical development, content production and multi-channel distribution, in a bid to create a new virtual world for the consumer market like the “Oasis.”

“Oasis” is derived from the blockbuster produced and directed by Steven Spielberg, “Ready Player One,” for which Digital Domain also provided VFX services. In the world defined in the film, “Oasis” represents a virtual universe which integrates visual environments, VR content and technology, and Digital Avatar—a concept that aligns with Digital Domain's objective and vision. Echoing the concept of “Oasis,” this conference includes multiple zones featuring Digital Domain VR theatre, 3Glasses and Meitu to provide visitors an immersive sensory experience.

Mr. Peter Chou, Chairman of the Board of Digital Domain, said, “The Greater China region is a vital, strategic market in the global landscape of Digital Domain. We have established long-term investment plans and business development priorities by stages to gradually achieve our predefined objectives. This conference is themed ‘Oasis,’ which conveys our ambition to build a brand-new virtual world. With the arrival of the 5G era, Digital Domain has the confidence to leverage its own strengths and work with its partners to turn the game-changing experience enabled by ‘Oasis’ into reality.” 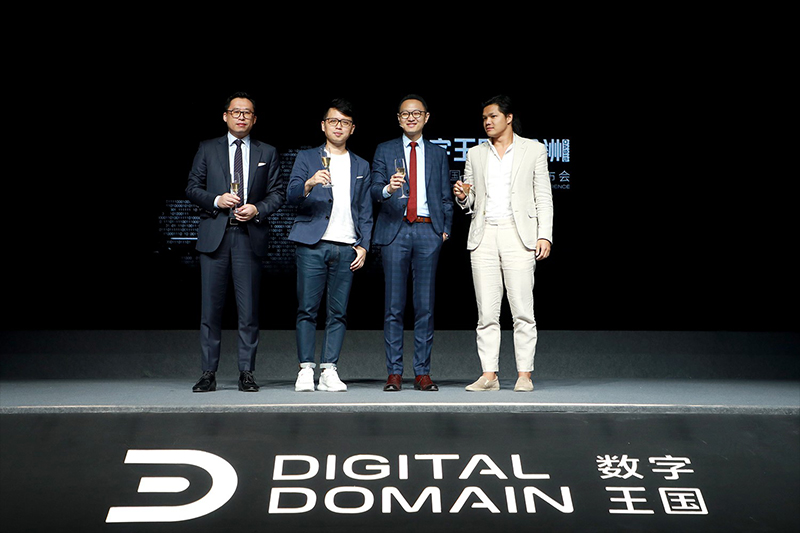 Looking back on Digital Domain's course of development in China, Mr. Daniel Seah, Executive Director and Chief Executive Officer of Digital Domain, said, “The past year was critical for Digital Domain. During the year, we have collaborated with multiple partners to try new business models and have made remarkable achievements in VFX, VR, VH and film and television content. 2018 marks the first year of Digital Domain from business-to-business market into consumer market. By developing ‘technology + entertainment,’ I believe that we will witness the launch of the virtual world.”

In view of the enormous and underserved demands of the Chinese film and television industry, Digital Domain will bring its proven experience in the global market to China and further explore the development and commercialization of VFX, VR, VH and investment in film and television content. 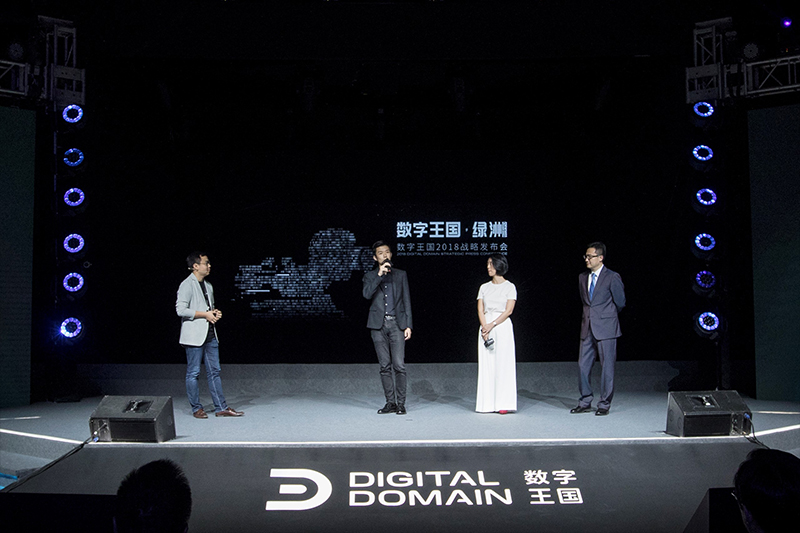 Digital Domain also announced its acquisition of 3Glasses, a leading global VR and Windows Mixed Reality company. Digital Domain will thus expand its VR business to hardware technology and create a favourable condition to build a complete VR industry chain, covering hardware, content and distribution. Since entering the VR industry in 2014, Digital Domain has been strongly committed in promoting mass consumer adoption of VR. Over the past four years, the Group made significant progress and successfully established business models in VR content production, as well as the establishment of Digital Domain Space (Beijing). Ms. Jessie Wang, Founder and Chief Executive Officer of 3Glasses, and Mr. Ling Zhang, Chief Executive Officer of Digital Domain Space, commented, Digital Domain, with its premier content creation and production capabilities, exclusive distribution platform, VR theatre, combined with the hardware technology edge from 3Glasses, will enable the Group to become a major driving force for the VR industry.

3. VH: Joining forces with Meitu to promote our “social-networking + entertainment” business practice to the consumer market
This conference also witnessed the kick-off of the cooperation between Digital Domain and Meitu, China’s largest selfie app. Under the strategic partnership agreement, the two parties will engage deeply in technology and products to jointly create a virtual idol IP for the consumer market and personal exclusive digital avatars to allow the users to break temporal and spatial boundaries to wander within a content world exclusively created by Digital Domain.

Mr. Wu Xinhong, Chief Executive Officer and Founder of Meitu, Inc., highly praised this partnership and said, “The ‘image’ DNA shared by Meitu and Digital Domain has become a connection point of the cooperation between the two parties. Relying on the extensive user base of Beauty Cam photo app and Meipai short video app, the technology of Digital Domain will reach the consumers from the screen. This cooperation will also help us provide social connections to our users as well as benefit our “Meitu Social Community” .” 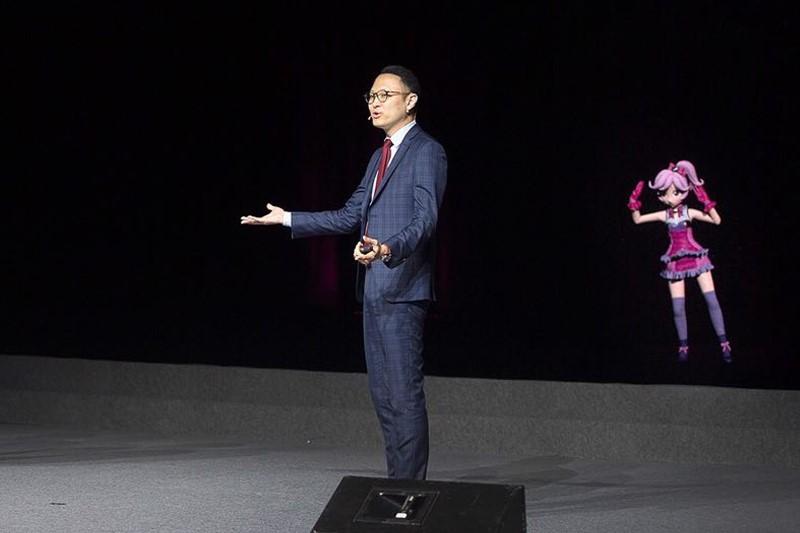 Digital Domain was the first to apply its VH technology into film and immersive entertainment production. For the blockbuster “Avengers: Infinity War,” Digital Domain used this technology to help create Thanos, a CG character with rich emotions. In 2018, Digital Domain and Prism Entertainment jointly created the holographic concert of “Teresa Teng: The Legend in Hangzhou,” which has demonstrated the true value of commercialization of its unique VH technology. As a commercial extension of this technology, virtual idol IP and digital avatars will become Digital Domain's vital opportunities in future business explorations.
When talking about the upcoming strategic linkage between the two parties, Mr. Seah expressed his expectations and said, "The close cooperation between Digital Domain and Meitu is an exciting start for us. After years of research and development, VH have undergone tremendous technological breakthroughs, enabling us to drive Digital Avatars in real time through game engines. Meitu encourages us to bridge the gap between technologies and application scenarios, and our cutting-edge technology can be turned into services for the majority of users. ”

4. Investment in film and television content: Partnering with Cenic Media to diversify IP content development and investment
Digital Domain also announced a continuation of its in-depth strategic partnership with Cenic Media. The parties involved will focus on exclusive IP and cooperate on investments in content and distribution, VFX and VR, and complementary channels, thus establishing a sound operation model for film and television content. Digital Domain and Cenic Media have worked together in films and television dramas such as “Ten Years Late” and “The Legends of Monkey King.”

Mr. Hanson He, Founder and President of Cenic Media, said, “Digital Domain is a major strategic partner of Cenic Media. We are looking forward to working with Digital Domain to make a difference in building China's original film and television IP and the industry's exclusive ecosystem. In the future, we plan to roll out “2 Broke Girls,” “Avengers,” “The Legend of Wang Jiang's Li Lu” and other new works.”

At the conference, with the aid of its industry-leading VH technologies, TV and film celebrities including Ms. Teresa Teng, Mr. Wei-zhong Wang and Ms. Ruby Lin expressed their endorsement by attending through vitual humans. Mr. Nicholas Tse, Chairman of Digital Domain Greater China, also made a surprise presence at the site in the form of virtual human. He said, “Digital Domain has absolute advantages in VFX, VR, VH, original IP and other fields. The cutting-edge technologies, together with creativity, will build an ‘Oasis’ for Digital Domain itself.”

Digital Domain creates transportive experiences that entertain, inform and inspire. The company is a pioneer in many fields, including visual effects, livestreaming landmark events in 360° virtual reality, building situational awareness applications, creating “virtual humans” for use in films and live events, and developing interactive content.

A creative force in visual effects and media applications, Digital Domain and its predecessor entities have brought artistry and technology to hundreds of motion pictures, commercials, video games, music videos and virtual reality experiences. Its groundbreaking visual effects appear in films such as “Titanic,” “The Curious Case of Benjamin Button” and blockbusters “The Fate of the Furious” and “Ready Player One”. Staff artists have won more than 100 major awards, including Academy Awards®, Clios, BAFTA awards and Cannes Lions.