08.09.18The Integration of Technology and Culture Ushers in a New Era of Holograms 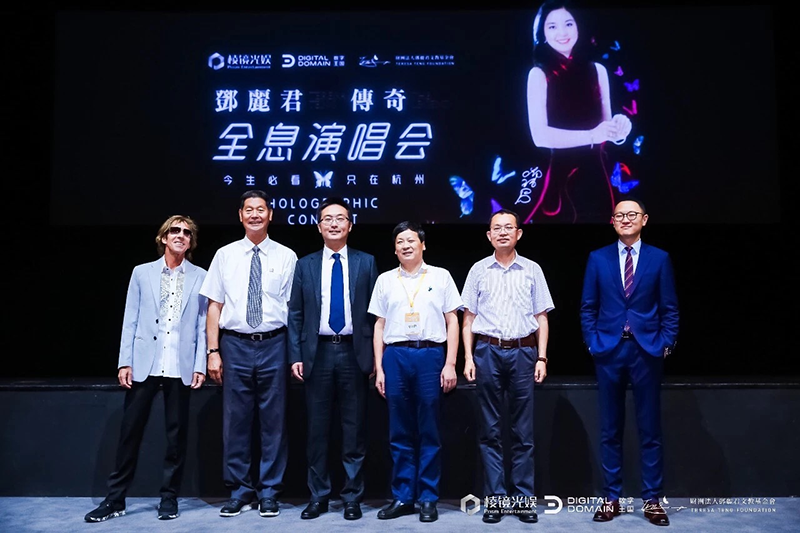 Photo Caption 1: (From left to right) Jamii Szmadzinski, the two-time Grammy® winner, famous violinist and international master of accompanying music, Mr. Teng Changfu, Chairman of the Teresa Teng Foundation, Mr. Xu Min, Founder and Chief Executive Officer of Prism Entertainment, Mr. Gong Zhinan, Deputy Minister of the Publicity Department of Hangzhou Municipal Committee, Director of Hangzhou Culture and Creative Department and Mr. Wang Zisheng, Vice President, Member of Party Committee of Hangzhou Culture Radio Television Group, Executive Director of Cultural Radio and TV Performing Arts Group, Mr. Daniel Seah, Executive Director and Chief Executive Officer of Digital Domain
Teresa Teng · The Legend enables the audience to enjoy the 360-degree hyper immersive experience through its first adoption of“holographic and panoramic” stage design. Due to the circumambient stage, the audience is fully immersed in the shadow of the star at centre stage. Playing on a swing, walking into the lotus pond, wandering under the moonlight–across time and space--the vivid movements and enchanting melodies of virtual Teresa Teng bring the audience a visual and aural feast. The concert also features a virtual host named “Dream”. As a super fan of Teng, she is responsible for the real-time interaction with the audiences. 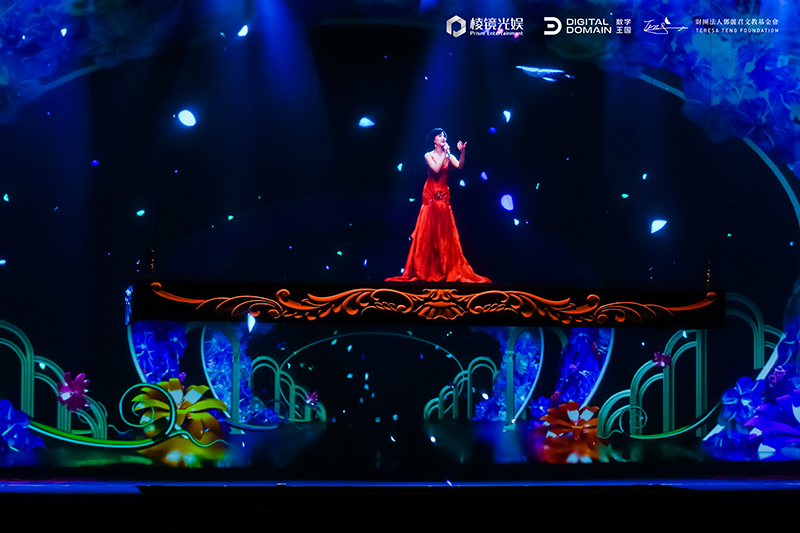 Mr. Daniel Seah, Executive Director and Chief Executive Officer of Digital Domain, said, “Digital Domain highly values the integration of technology and entertainment. Hangzhou, the city of ‘technotainment,’ is an important battleground for our group to carry out the breakthrough and transformative strategies of location-based entertainment (LBE) in China. It’s an honour for us to cooperate with Prism Entertainment and the Teresa Teng Foundation to unveil the elegance and charm of Teng through a hologram with the leading three-in-one visual effects technology of Hollywood. The optimization of virtual LBE lays the groundwork for our company’s ecological development, from the enterprise market to the consumer market.”

Mr. Teng Changfu, Chairman of the Teresa Teng Foundation, said, “I’m glad that Digital Domain’s incredible Virtual Humans technology gives us a wonderful chance to remember and be moved by Teresa in Hangzhou. The efforts made by these leading giants, Digital Domain and Prism Entertainment, showcase Teresa Teng’s unique charm and enable her music to reverberate in future generations. My family and I, along with fans around the world, are full of gratitude in anticipation of this hologram concert.”
The Virtual Humans technology from Digital Domain has long been praised. In 2008, the group’s visual effects appeared in the film The Curious Case of Benjamin Button, in which actor Brad Pitt portrays a unique man who is born old and gradually becomes younger. In 2012, Digital Domain created a digital avatar of the iconic American artist Tupac Shakur, who died in 1996, for a performance at the Coachella Valley Music and Arts Festival. The vivid virtual image of the artist incited heated discussions around the world about his mysterious revival. In 2013, Digital Domain created a Virtual Human of Teresa Teng for a concert with Jay Chou, an internationally renowned singer from Taiwan. In 2017, the premiere of Today We Meet Again · The Virtual Teresa Teng Music Magical Show was presented in Taipei, which won wide acclaim within the industry. In 2018, in collaboration with the Teresa Teng Foundation and Ever Rich Foundation, Digital Domain again created the Virtual Human of Teresa Teng for a charity show in Taipei to memorize the 65th anniversary of the legend on the eve of Mother’s Day.

Digital Domain creates transportive experiences that entertain, inform and inspire. The company is a pioneer in many fields, including visual effects, livestreaming landmark events in 360° virtual reality, building situational awareness applications, creating “virtual humans” for use in films and live events, and developing interactive content.

A creative force in visual effects and media applications, Digital Domain and its predecessor entities have brought artistry and technology to hundreds of motion pictures, commercials, video games, music videos and virtual reality experiences. Its groundbreaking visual effects appear in films such as “Titanic”, “The Curious Case of Benjamin Button” and blockbusters “The Fate of the Furious” and “Ready Player One”. Staff artists have won more than 100 major awards, including Academy Awards®, Clios, BAFTA awards and Cannes Lions.